The New Yorker recently published an article about Tyrone Hayes, a biologist at the University of California, Berkeley. Since 1997, Hayes has focused his research on the health effects of exposure to atrazine, the most widely used herbicide in the U.S. In 1997, Hayes was hired by the consulting firm, EcoRisk, Inc. His role was to research atrazine for Novartis, the multinational company responsible for the herbicide.  (Novartis later became Syngenta).

most widely used herbicide in the U.S. for broadleaf crops such as corn and sugarcane and golf courses and residential lawns. Farmers apply more than 76 million pounds of atrazine each year, which, according to Syngenta provides $3 billion in benefits by increases crop yields by 600 million bushels each year and reducing 85 billion tons of soil erosion annually. 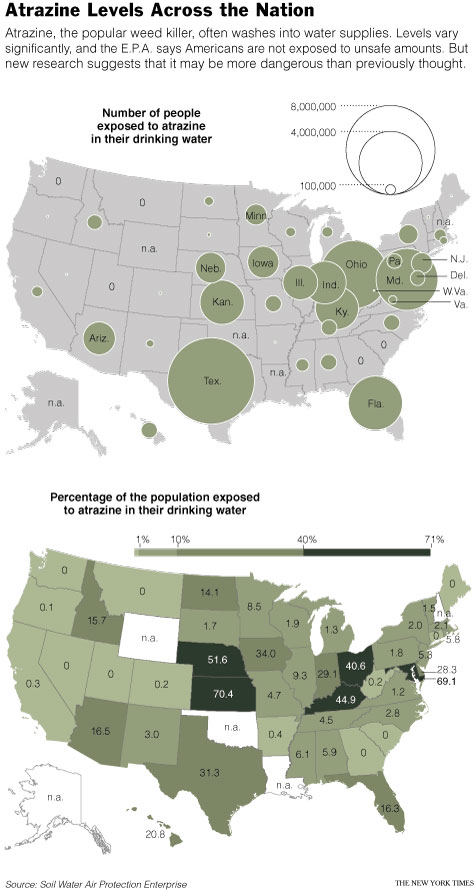 It also turns out that atrazine is the most commonly detected contaminant in U.S. drinking water. In 2010, 16 cities sued Syngenta after finding atrazine levels exceeding the standards under the federal Safe Drinking Water Act. In 2012, Syngenta settled two class-action law suits brought by towns with contaminated drinking water. When Hayes’ notified the EcoRisk that his data indicated that atrazine was extremely toxic, Novartis refused to continue funding his research. Hayes was able to secure other sources of funding, and in 2012 published data replicating his earlier findings (which provided the scientific basis for the aforementioned lawsuits), but this marked the beginning of widespread opposition to his findings. Despite being banned in the European Union since 2004 because of it’s persistence in the water supply and corresponding effects on the endocrine system, in 2006 EPA indicated that “the risks associated with [atrazine] residue pose a reasonable certainty of no harm.” EPA has since begun research evaluating the herbicide’s health effects, despite the array of data coming from Hayes’ lab and others, all confirming that atrazine is toxic.

While EPA continues to “look” for answers about atrazine’s health effects, Hayes’ research repeatedly indicates that exposure to the herbicide disrupts the endocrine system. The majority of his research is on frogs, and shows that exposure to atrazine causes male frogs to exhibit female characteristics (for a brief description about this process, start viewing the video here around minute 2). Known as “intersex,” the effect is seen in waterways across the country, where large scale fish kills are common and fish are routinely found with male and female reproductive organs.

In “The Ripple Effect,”  Alex Prud’homme discusses endocrine disrupting pollutants. Which he classifies under the umbrella of “emerging contaminants.” These include the array of chemicals or

materials in water, soil, river sediments, or air—typically present at very low concentrations—that were not previously detected or are being detected at levels that are higher than expected. Specifically, endocrine disruptors, like atrazine, are found in PCBs, industrial chemicals, pesticides, cleaning products, and plastics (BPA). The main source of water contamination, however, is agricultural runoff caused by stormwater runoff from treated fields.

According to Hayes’ research, atrazine causes hormone imbalances by turning on an enzyme, aromatase, that turns testosterone into estrogen, feminizing males.

This is especially relevant for women because breast cancer cells are regulated by the aromatase enzyme. When breast tissue develops a cancerous cell, aromatase converts adrogens into estrogens, which promote proliferation of those cancerous cells, creating a tumor. In fact, as Hayes points out, one of the latest treatments for breast cancer is a medication called Letrozol, which blocks estrogen so cancerous cells cannot develop into tumors. Letrozol is, it turns out, manufactured and sold by Novartis.

Aviv’s New Yorker article is worth a thorough read, discussing several frustrating aspects of Hayes’ career and its lack of any meaningful impact on EPA’s regulation of atrazine. One of the most interesting sections, however, addresses EPA’s reliance on the Data Quality Act as the foundation for its refusal to regulate the herbicide. As Aviv explains, after EPA reviewed Hayes’ data in 2002, an organization called the Center for Regulatory Effectiveness petitioned EPA to ignore his results because his studies failed to meet the standards for quality under the Data Quality Act. What Aviv highlights is that not only is Jim Tozzi, the head of the Center for Regulatory Effectiveness, a consultant for Syngenta, but that he was behind the language that would ultimately inhibit agency reliance on scientific data. Regardless of Tozzi’s motivation,

EPA revised its determination of Hayes’ research and refused to restrict atrazine based on its endocrine disrupting properties until “appropriate testing protocols have been established.” This raises the question: what is appropriate? Hayes has worked on atrazine’s endocrine disrupting properties at Berkeley for more than 15 years, a period during which he has published his results in numerous peer reviewed journals, including Nature, and has reproduced his research with the same results. That sounds like “established protocols” to me.